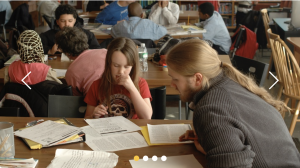 In the 1980s, Carole Remick was an English professor running the co-op program at the University of Massachusetts Boston when she noticed that few students of color pursued internships and careers in journalism.

Though she was white and did not have a background in journalism, Mrs. Remick secured grant funding from the Dow Jones Newspaper Fund and launched the High School Journalism Collaborative, which introduced many teenagers of color to the journalism careers they would later pursue. The program became a model for similar ventures across the country.

Mrs. Remick died Oct. 18 in the Kaplan Family Hospice House in Danvers of lung cancer. She was 78 and had lived in Marblehead.

The collaborative invited high school students of color from the Boston area to a week long summer program to learn from professional journalists from around the country about the nuts and bolts of the industry.

With support from UMass Boston and Regis College, professional staff from New England newspapers such as the Globe, the Boston Herald, The Patriot Ledger of Quincy, and The Christian Science Monitor taught high school students and helped sponsor the program.

As part of the workshop, students interviewed newsmakers and covered local events. At the end of the week, the students were expected to produce a newspaper.

“For two decades, the workshop brought together students of color for a week to teach them the basics of journalism,’’ Globe Metro columnist Adrian Walker wrote in 2007, when the collaborative found its funding imperiled. “As a former instructor in the program, I can attest that one can learn just so much about producing a newspaper in a week. But a week is plenty of time to awaken a budding interest in writing and in newspapers.’’

Mrs. Remick developed many relationships with many journalists to help her run the program, which became so popular that it began in 1996 to recruit students from all over New England. In 2001, Mrs. Remick received a Lifetime Achievement Award from the Journalism Education Association.

Michelle Johnson, who teaches journalism at Boston University, was a copy editor at the Globe in 1988 when she met Mrs. Remick and later became the codirector of the collaborative.

“She had reporters lined up to teach this program,’’ Johnson said. “People in the industry understood the importance of doing a program like this.’’

Michael Davis, executive editor at the Journal and Courier in Lafayette, Ind., was an editor at TV Guide 10 years ago when he was recruited by Mrs. Remick to speak to her student journalists.

“For many of the students in the program who would become professional journalists later in life, this program would be their first journalism experience,’’ Davis said. “There are many reporters around the country who have Carole to thank for their career.’’

Davis said Mrs. Remick treated students as if they were her own children, not only sharing with them her interest in the written word, but bringing them to Red Sox games and to hear the Boston Symphony Orchestra.

In recent years, as many sponsoring newspapers and Dow Jones cut back on funding, Mrs. Remick began to partially support the program out of her own pocket. Although she officially retired from UMass Boston in 1997, she continued to help out.

In 1954, she received a bachelor’s degree in English from Regis College in Weston and graduated in 1963 from Boston College with a master’s in English.

She was married to E. Bruce Remick of Marblehead, who was a teacher and guidance counselor at high schools in Bourne, Malden, and Marblehead. He died in 1996.

Alison Cattan of New York City has been best friends with Mrs. Remick since they were students at Regis College and really got to know her during their first jobs, teaching at Cristo Rey Elementary School in Santa Fe.

“She was very popular in school, and she was loved by everyone,’’ Cattan said. “She had a love of people and life that was infectious.’’

Mrs. Remick briefly taught high school English in Lake George, N.Y., and Peabody, and returned to Regis College to work in the school’s alumni office, where she was instrumental in helping to raise money for the school.

In the mid-1960s, Mrs. Remick moved to Boston State College, where she began teaching English and trained English majors to become teachers.

In 1982, Boston State College merged with the University of Massachusetts. Mrs. Remick remained there as an English professor at UMass Boston and ran the school’s co-op education program.

Globe reporter Milton J. Valencia had his first journalistic experience in the program when he was a junior at B.M.C. Durfee High School in Fall River. He is now on the program’s board of directors and has taken a larger role in helping other future journalists.

“The collaborative did great things for me,’’ he said, “and I know that there are many other journalists who are grateful for Carole’s dedication.’’

A funeral Mass will be said at 11 a.m. Nov. 5 in Our Lady Star of the Sea Church in Marblehead. Burial will follow in Waterside Cemetery in Marblehead.